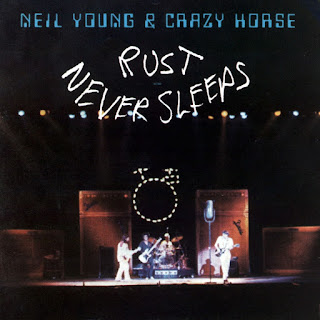 Rust Never Sleeps is a live album by Canadian singer-songwriter Neil Young and American band Crazy Horse. It was released on June 22, 1979, by Reprise Records. Most of the album was recorded live, then overdubbed in the studio. Young used the phrase "rust never sleeps" as a concept for his tour with Crazy Horse to avoid artistic complacency and try more progressive, theatrical approaches to performing live.

"Powderfinger" is the first song of the second, electric, side of Rust Never Sleeps. Allmusic critic Jason Ankeny describes the song, following the album's mellower, acoustic first side, as "a sudden, almost blindsiding metamorphosis, which is entirely the point — it's the shot you never saw coming."