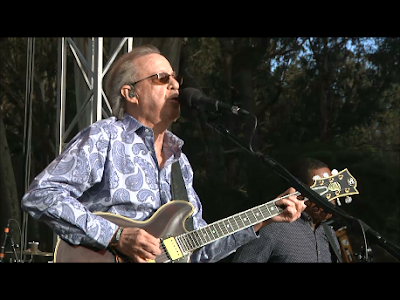 "Mixed Up, Shook Up Girl"

Willy DeVille said about the song "I know Mick Jagger likes it. It's about a woman I know who was drug addict. She was mixed up and she was shook up. That's what it's about.

Cabretta, known as Mink DeVille in the United States, was the 1977 debut album by Mink DeVille. It peaked at number 186 on the Billboard 200 chart and was voted the 29th best album of 1977 in the Village Voice's Pazz & Jop critics' poll.[1] A single from the album, “Spanish Stroll,” was a top-20 hit in the U.K
Gepost door Arthur,s Musical Journey op woensdag, oktober 14, 2015 Geen opmerkingen:

.
Ronnie Earl is a two-time W. C. Handy Blues Music Award winner as Guitar Player of the Year. For five years he was an Associate Professor of Guitar at Berklee College of Music and in 1995 he released Ronnie Earl: Blues Guitar with Soul, an instructional VHS tape that was then rereleased in DVD format in 2005. Earl was also the blues instructor at the 'National Guitar Summer Workshop'. His albums primarily consist of strong instrumental compositions and traditional covers.


Smokin' Joe Kubek (born November 30, 1956, Grove City, Pennsylvania[1]) is an American blues guitarist.
Although he was born in Pennsylvania, Kubek grew up in Texas and is associated with the Texas blues style. He played with Freddie King while still a teenager, and put together his own band to tour in the Dallas area.[1] He met Bnois King in the 1980s, and together they put together the first incarnation of Kubek's band. Kubek signed to Bullseye Blues in 1991 and released his debut record; he has steadily released albums since then.
Gepost door Arthur,s Musical Journey op maandag, oktober 12, 2015 Geen opmerkingen: