Van Morrison - Every Time I See A River 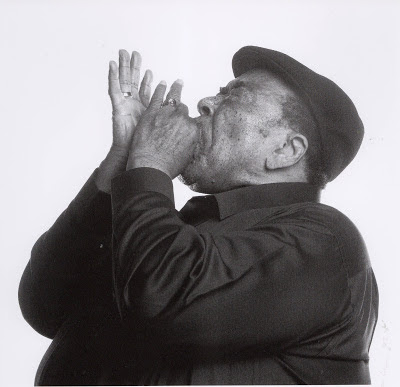 James Henry Cotton (July 1, 1935 – March 16, 2017)[1] was an American blues harmonica player, singer and songwriter, who performed and recorded with many of the great blues artists of his time and with his own band. He played drums early in his career but is famous for his harmonica playing.
Cotton began his professional career playing the blues harp in Howlin' Wolf's band in the early 1950s.[3] He made his first recordings in Memphis for Sun Records, under the direction of Sam Phillips. In 1955, he was recruited by Muddy Waters to come to Chicago and join his band. Cotton became Waters's bandleader and stayed with the group until 1965.[4] In 1965 he formed the Jimmy Cotton Blues Quartet, with Otis Spann on piano, to record between gigs with Waters's band. He eventually left Waters to form his own full-time touring group. His first full album, on Verve Records, was produced by guitarist Mike Bloomfield and vocalist and songwriter Nick Gravenites, who later were members of the band Electric Flag.[5]
In the 1970s, Cotton played harmonica on Waters's Grammy Award–winning 1977 album Hard Again, produced by Johnny Winter.(wikipedia)

World-renowned blues harmonica master James Cotton, whom Rolling Stone called, “One of the greats of all time, burning with brilliant virtuosity,” died on March 16, 2017 of pneumonia at St. David’s Medical Center in Austin, Texas. He was 81. His overwhelmingly powerful harmonica playing was one of the iconic sounds of the blues. He toured worldwide for over 60 years. 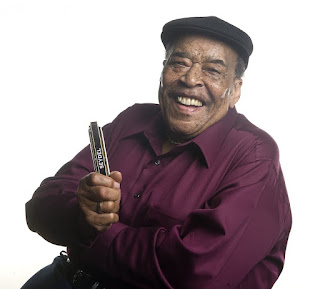 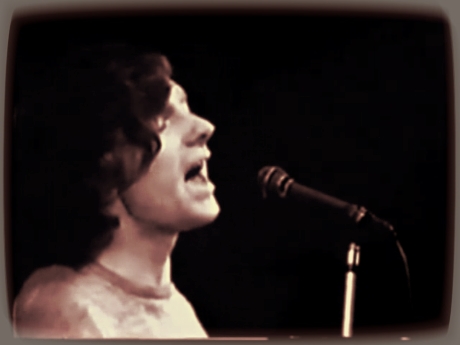 Them were a Northern Irish band formed in Belfast in April 1964, most prominently known for the garage rock standard "Gloria" and launching singer Van Morrison's musical career.[4] The original five member band consisted of Morrison, Alan Henderson, Ronnie Milling, Billy Harrison and Eric Wrixon. The group was marketed in the United States as part of the British Invasion.[5]
Them scored two UK hits in 1965 with "Baby, Please Don't Go" (UK #10) and "Here Comes the Night" (UK #2; Ireland #2). The latter song and "Mystic Eyes" were Top 40 hits in the US wikipdia

Here Comes The Night
"Here Comes the Night" is a 1964 song, written by Bert Berns. It became a hit for Northern Irish band Them, fronted by Van Morrison, in March 1965, charting at No. 2 in the UK and No. 24 in the U.S. Them's single is listed at either No.33 or No.36 in the Top 100 best-selling UK singles during the calendar year 1965, depending on source. 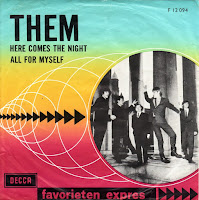 The song was originally released as a single in both the UK and the U.S. by another Decca Records' artiste, Lulu, in November 1964. Lulu's recording charted at No.50 in the UK,and failed to chart at all in the U.S.

Gloria
"Gloria" is a song written by Northern Irish singer-songwriter Van Morrison and originally recorded by Morrison's band Them in 1964 and released as the B-side of "Baby, Please Don't Go". The song became a garage rock staple and a part of many rock bands' repertoires. It is particularly memorable for its "G–L–O–R–I–A" chorus. It is easy to play, as a simple three-chord song, and thus is popular with those learning to play guitar. 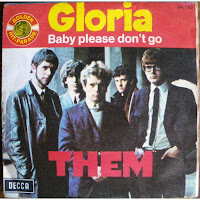 Morrison said that he wrote "Gloria" while he performed with the Monarchs in Germany in the summer of 1963, at just about the time he turned eighteen years old.[4] He started to perform it at the Maritime Hotel when he returned to Belfast and joined up with the Gamblers to form the band Them. He would ad-lib lyrics as he performed, sometimes stretching the song to fifteen or twenty minutes. After signing a contract with Dick Rowe and Decca, Them went to London for a recording session at Decca Three Studios in West Hampstead on 5 July 1964; "Gloria" was one of the seven songs recorded that day. Besides Morrison, present were Billy Harrison on guitar, Alan Henderson on bass, Ronnie Millings on drums and Patrick John McCauley on keyboards. Rowe brought in session musicians Arthur Greenslade on organ and Bobby Graham on drums, since he considered the Them members too inexperienced. There remains some dispute about whether Millings and McCauley were miked up, but Alan Henderson contends that Them constituted the first rock group to use two drummers on a recording.[5] Although some sources claim that Jimmy Page played second guitar, other sources deny this. Wikipedia

Mystic Eyes
"Mystic Eyes" is a song written by Northern Irish singer-songwriter Van Morrison when he was leader of the band Them. It was the opening tune for the band's first album, The Angry Young Them that was released in June 1965. It was released as a single in the US in October 1965 and in the UK on 12 November 1965. It charted at No. 33 in the US (it did not chart in the UK) 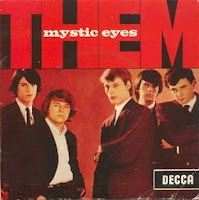 In 1965, Van Morrison explained to a Belfast reporter how the song had just happened during the first recording session for the album and the band was just "busking" around. "Someone started playing a fast riff and we all just joined in. The lyrics I sing at the end were just words from a song I had been writing at the time." Later in 1966 he told an American reporter how it was inspired by an occasion in Nottingham Park as he walked by a graveyard wall where some children played next to it. "You know, man, there was life and death beside one another so close...yet so different...And then I thought of the bright lights in the children's eyes...and the cloudy lights in the eyes of the dead."Wikipedia


"I Put a Spell on You" is a 1956 song written by Jay Hawkins, whose recording was selected as one of the Rock and Roll Hall of Fame's 500 Songs that Shaped Rock and Roll. It was also ranked No. 313 on Rolling Stone magazine's list of The 500 Greatest Songs of All Time. The track became a classic cult song covered by a variety of artists and was his greatest commercial success, reportedly surpassing a million copies in sales,[3][4] although it failed to make the Billboard pop or R&B charts.[

The Story Of Them
http://arthurfromholland.blogspot.nl/2011/06/them-with-van-morrisonthe.html