"Crying Time" is a song from 1964 written and originally recorded by the American country music artist Buck Owens. It gained greater success in the version recorded by Ray Charles, which won two Grammy Awards in 1967. Numerous other cover versions have been performed and recorded over the intervening years 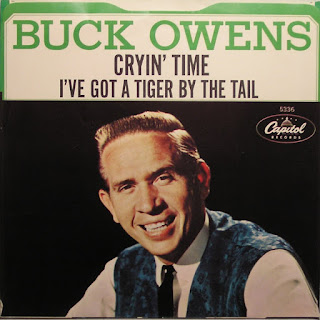 Owens recorded the original version of his song and released it as the B side to the 45 single "I've Got a Tiger By the Tail" in 1964, Capitol 5336, but it failed to reach the music charts. A cover version of "Crying Time" was then recorded by R&B singer Ray Charles, and his version proved to be a hit. Featuring backing vocals by the Jack Halloran Singers and The Raelettes, the song reached number six on the Billboard Hot 100 chart in February 1966

Charles' version of the song also peaked at number five on the R&B chart and spent three weeks at number one on the easy listening chart.[3] In the United Kingdom, the song reached number 50 on the UK Singles Chart.[4] In addition, Charles' version of "Crying Time" won two Grammy Awards in 1967, in the categories Best R&B Recording and Best R&B Solo Performance.[1


Charles intended his version of Owens' song to be a tribute to the country music style he appreciated (Charles had successfully covered other country music songs in the past, such as "I Can't Stop Loving You"). He was quoted as saying that he didn't record "Crying Time" and other country songs written by Owens "out of disrespect for Buck. I'm crazy about Buck. But I heard something that fit my style. The key was keeping my style while watching my style work in different ways."


Ray Charles and Barbra Streisand memorably performed the song as a duet on her 1973 soundtrack album from her CBS television special Barbra Streisand...And Other Musical Instruments. This cover was featured in the episode, "The Glass Is Always Cleaner", of the NBC drama series Las Vegas. Streisand also included a solo version of the song on her 1974 album ButterFly.

Lorrie Morgan recorded a cover of the song for the soundtrack to the 1993 film The Beverly Hillbillies. Her version peaked at number 59 on the Billboard Hot Country Singles & Tracks chart.

Alvis Edgar Owens Jr. (August 12, 1929 – March 25, 2006), professionally known as Buck Owens, was an American musician, singer, songwriter and band leader who had 21 No. 1 hits on the Billboard country music charts with his band the Buckaroos. They pioneered what came to be called the Bakersfield sound, named after Bakersfield, California, the city Owens called home and from which he drew inspiration for what he preferred to call American music
Gepost door Arthur,s Musical Journey op maandag, oktober 08, 2018 Geen opmerkingen: