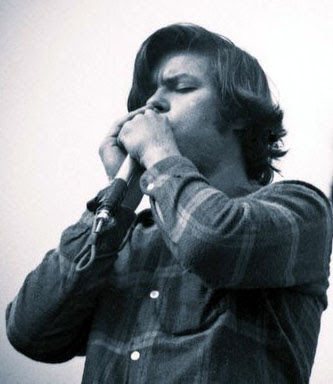 Alan "Blind Owl" Christie Wilson (July 4, 1943 – September 3, 1970) was the leader, singer, and primary composer in the American blues band Canned Heat. He played guitar and harmonica, and wrote several songs for the band.


On the Road Again

Wilson was born in Boston, Massachusetts and grew up in the Boston suburb of Arlington, Massachusetts. He majored in music at Boston University and often played the Cambridge coffeehouse folk-blues circuit. He acquired the nickname "Blind Owl" owing to his extreme nearsightedness; in one instance when he was playing at a wedding, he laid his guitar on the wedding cake because he did not see it. As Canned Heat's drummer, Fito de la Parra, wrote in his book: "Without the glasses, Alan literally could not recognize the people he played with at two feet, that's how blind the 'Blind Owl' was."

With Canned Heat, Wilson performed at two prominent concerts of the 1960s era, the Monterey Pop Festival in 1967 and Woodstock in 1969. Canned Heat appeared in the film Woodstock, and the band's "Going Up the Country," which Wilson sang, has been referred to as the festival's unofficial theme song.[1] Wilson also wrote "On the Road Again," arguably Canned Heat's second-most familiar song.

Wilson was a passionate conservationist who loved reading books on botany and ecology. He often slept outdoors to be closer to nature. In 1969, he wrote and recorded a song, "Poor Moon", which expressed concern over potential pollution of the moon. He wrote an essay called 'Grim Harvest', about the coastal redwood forests of California, which was printed as the liner notes to the Future Blues album by Canned Heat.

After Eddie 'Son' House's 'rediscovery' in 1964, Wilson taught him how to play again the songs House had recorded in 1930 and 1942 (which he had forgotten over a long absence from music); House recorded for Columbia in 1965 and two of three selections featuring Wilson on harmonica and guitar appeared on the set. On the double album Hooker 'N Heat (1970), John Lee Hooker is heard wondering how Wilson is capable of following Hooker's guitar playing so well. Hooker was known to be a difficult performer to accompany, partly because of his disregard of song form. Yet Wilson seemed to have no trouble at all following him on this album. Hooker concludes that "you [Wilson] musta been listenin' to my records all your life". Hooker is also known to have stated "Wilson is the greatest harmonica player ever"
Stephen Stills' song "Blues Man" from the album Manassas is dedicated to Wilson, along with Jimi Hendrix and Duane Allman.


Wilson died in Topanga Canyon, California of a drug overdose at age 27. Although Wilson had reportedly attempted suicide twice before and his death is sometimes reported as a suicide, this is not clearly established and he left no note.