The Glen Campbell Goodtime Hour is an American network television music and comedy variety show hosted by singer Glen Campbell from January 1969 through June 1972 on CBS. He was offered the show after he hosted a 1968 summer replacement for The Smothers Brothers Comedy Hour.


"Sunshine of Your Love" is a 1967 song by the British rock band Cream. With elements of hard rock, psychedelia, and pop, it is one of Cream's best-known and most popular songs. Cream bassist and vocalist Jack Bruce based it on a distinctive bass riff or repeated musical phrase he developed after attending a Jimi Hendrix concert. Guitarist Eric Clapton and lyricist Pete Brown later contributed to the song. Recording engineer Tom Dowd suggested the rhythm arrangement in which drummer Ginger Baker plays a distinctive tom-tom drum rhythm, although Baker has claimed it was his idea. 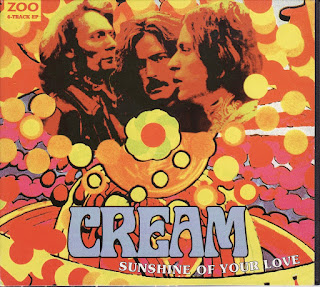 The song was included on Cream's second album Disraeli Gears in November 1967, which was a best seller. Atco Records, the group's American label, was initially unsure of the song's potential. After recommendations by other label-affiliated artists, it released an edited single version in January 1968 (or possibly December 1967).[a] The song became Cream's first and highest charting American single and one of the most popular singles of 1968. In September 1968, it became a modest chart hit after being released in the UK.
Cream performed "Sunshine of Your Love" regularly in concert and several live recordings have been issued, including on the Royal Albert Hall London May 2-3-5-6, 2005 reunion album and video. Hendrix performed faster instrumental versions of the song, which he often dedicated to Cream. Several rock journals have placed the song on their greatest song lists, such as Rolling Stone, Q magazine, and VH1. The Rock and Roll Hall of Fame included it on its list of the "500 Songs That Shaped Rock and Roll".(Wikipedia)