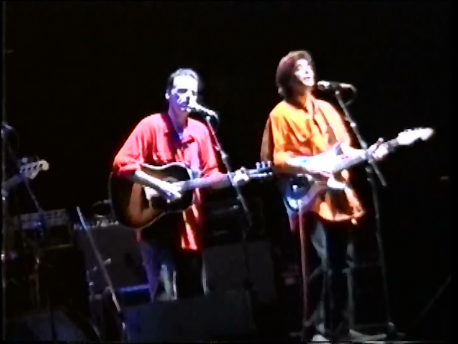 Little Village was an American/British rock band, formed in 1991 by Ry Cooder (guitar, vocal), John Hiatt (guitar, piano, vocal), Nick Lowe (bass, vocal) and Jim Keltner (drums). Each of the group's members had previously worked on Hiatt's 1987 album Bring The Family, and formed in 1991 while on a break from their own musical projects.
The group's name was initially (and jokingly) announced as Hiatus. It was soon changed to Little Village, in reference to the foul-mouthed in-studio diatribe by Sonny Boy Williamson II, on a Chess reissue album titled Bummer Road. The group released its only album, Little Village, in early 1992. The songs were composed by all four group members and mainly sung by Hiatt, although Lowe took lead on two songs and Cooder one. While the album was met with general commercial indifference, it was nominated in 1993 for a Grammy Award as Best Rock Vocal Performance by a Duo or a Group.[1The album peaked at #23 in the UK Albums Chart.
/
Little Village - Across The Borderline... door morrisanddylan

ACROSS THE BORDERLINE (THE BORDER, 1982)
Across the Borderline was written by Ry Cooder, John Hiatt and Jim Dickinson, and was sung by Freddy Fender for the movie soundtrack for The Border, starring Jack Nicholson. Ry Cooder later performed his own version of the song, which is about immigrants trying to cross the Mexican border into America. Cooder said: "To me, that borderline may be inside yourself." Willie Nelson has also recorded a beautiful version of this song, which includes the lines:

Up and down the Rio Grande
A thousand footprints in the sand
Reveal a secret no one can define
The river flows on like a breath
In between our life and death
Tell me who is next to cross the borderline.