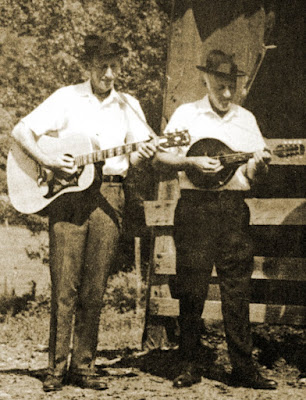 The Morris Brothers were a popular fraternal duo during the late '30s best known for their song "Let Me Be Your Salty Dog," which later became the bluegrass standard "Salty Dog Blues." Zeke and Wiley Morris were born three years apart in Old Fort, NC. Their eldest brother, George, was the first to get into music, working with J.E. Mainer and his brother Wade. Mainer's fiddler, John Love, tried to convince George to join the band, but Love instead ended up with 17-year-old Zeke, who remained with the Mainers for three years and participated in the band's first recording session for Bluebird in 1935.(AllMusic)

Wade Mainer and Zeke soon left to form their own group, adding fiddler Homer Sherrill. They continued recording for Bluebird and also worked at a Raleigh radio station. After Mainer left, Morris, Sherrill, and the rest of the group stayed together to appear on a Danville station. By 1938, Wiley Morris had joined them, and Wiley, Zeke, and Homer recorded several singles for Bluebird, changing their name to The Morris Brothers a few months later for a nine-song session that included the first version of "Salty Dog Blues." The Brothers continued appearing on local radio stations, occasionally joined by George.(AllMusic)

During their career, The Morris Brothers usually worked as a duo and didn't always have a backing band; sometimes they even led separate groups. The two split up in Knoxville in the early '40s; Wiley joined the Dixie Pardners, while Zeke joined a band at Johnson City radio. The Morris Brothers recorded together for the last time in 1945 for RCA Victor. Among the songs was a new version of their signature tune, plus "Tragic Romance" and "Somebody Loves You Darling."(AllMusic)

They went into semi-retirement, eventually moving to Black Mountain, NC, and opening an auto body shop. They did perform infrequently through the '60s and '70s at various festivals and in 1972 recorded an album featuring the fiddle playing of Homer Sherrill.(AllMusic)

They also joined Earl Scruggs and appeared on a PBS-TV special on which they recorded yet another version of "Salty Dog Blues." In 1985, The Morris Brothers appeared at a Charlotte radio old-timers reunion for their final performance. Five years later, Wiley died; Zeke remained at his body shop and expressed no further interest in performing.(AllMusic) 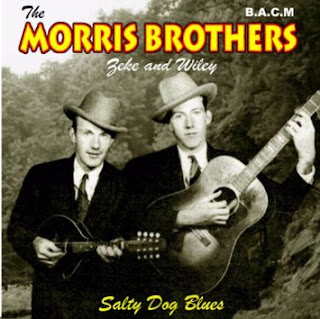 Story of Zeke and Wiley
http://www.historysouth.org/morris/