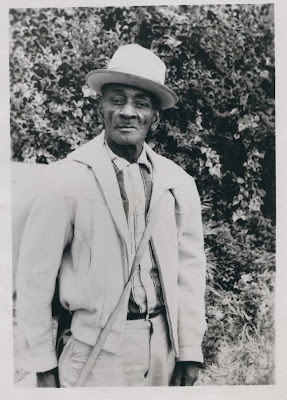 Mance Lipscomb (1895-1976), guitarist and songster, was born to Charles and Jane Lipscomb on April 9, 1895, in the Brazos bottoms near Navasota, Texas, where he lived most of his life as a tenant farmer. His father was an Alabama slave who acquired the surname Lipscomb when he was sold to a Texas family of that name. Lipscomb dropped his given name, Bowdie Glenn, and named himself Mance when a friend, an old man called Emancipation, passed away. Lipscomb and Elnora, his wife of sixty-three years, had one son, Mance Jr., three adopted children, and twenty-four grandchildren.

Lipscomb represented one of the last remnants of the nineteenth-century songster tradition, which predated the development of the blues. Though songsters might incorporate blues into their repertoires, as did Lipscomb, they performed a wide variety of material in diverse styles, much of it common to both black and white traditions in the South, including ballads, rags, dance pieces (breakdowns, waltzes, one and two steps, slow drags, reels, ballin' the jack, the buzzard lope, hop scop, buck and wing, heel and toe polka), and popular, sacred, and secular songs. Lipscomb himself insisted that he was a songster, not a guitarist or "blues singer," since he played "all kinds of music." His eclectic repertoire has been reported to have contained 350 pieces spanning two centuries. (He likewise took exception when he was labeled a "sharecropper" instead of a "farmer.")

Lipscomb was born into a musical family and began playing at an early age. His father was a fiddler, his uncle played the banjo, and his brothers were guitarists. His mother bought him a guitar when he was eleven, and he was soon accompanying his father, and later entertaining alone, at suppers and Saturday night dances. Although he had some contact with such early recording artists as fellow Texans Blind Lemon Jefferson and Blind Willie Johnsonqqv and early country star James Charles (Jimmie) Rodgers,qv he did not make recordings until his "discovery" by whites during the folk-song revival of the 1960s.

Between 1905 and 1956 he lived in an atmosphere of exploitation, farming as a tenant for a number of landlords in and around Grimes County, including the notorious Tom Moore, subject of a local topical ballad. He left Moore's employ abruptly and went into hiding after he struck a foreman for abusing his mother and wife. Lipscomb's own rendition of "Tom Moore's Farm" was taped at his first session in 1960 but released anonymously (Arhoolie LP 1017, Texas Blues, Volume 2), presumably to protect the singer. Between 1956 and 1958 Lipscomb lived in Houston, working for a lumber company during the day and playing at night in bars where he vied for audiences with Texas blues great Sam "Lightnin'" Hopkins,qv whom Lipscomb had first met in Galveston in 1938. With compensation from an on-the-job accident, he returned to Navasota and was finally able to buy some land and build a house of his own. He was working as foreman of a highway-mowing crew in Grimes County when blues researchers Chris Strachwitz of Arhoolie Records and Mack McCormick of Houston found and recorded him in 1960.

His encounter with Strachwitz and McCormick marked the beginning of over a decade of involvement in the folk-song revival, during which Lipscomb won wide acclaim and emulation from young white audiences and performers for his virtuosity as a guitarist and the breadth of his repertoire. Admirers enjoyed his lengthy reminiscences and eloquent observations regarding music and life, many of which are contained in taped and written materials in the Mance Lipscomb-Glenn Myers Collection in the archives and manuscripts section of the Barker Texas History Centerqv at the University of Texas at Austin. He made numerous recordings and appeared at such festivals as the Berkeley Folk Festival of 1961, where he played before a crowd of more than 40,000. In clubs Lipscomb often shared the bill with young revivalists or rock bands. He was also the subject of a film, A Well-Spent Life (1970), made by Les Blank. Despite his popularity, however, he remained poor. After 1974 declining health confined him to a nursing home and hospitals. He died in Grimes Memorial Hospital, Navasota, on January 30, 1976, and was buried at West Haven Cemetery.
Written by
John Minton