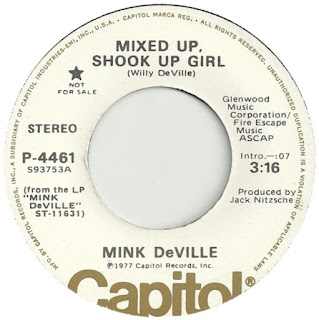 Willy DeVille said about the song "Mixed Up, Shook Up Girl": "I know Mick Jagger likes it. It's about a woman I know who was drug addict. She was mixed up and she was shook up. That's what it's about." 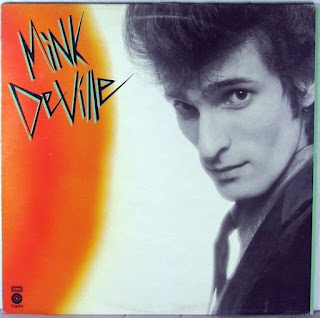 Jack had assisted on several Stones sessions, and it was his collaboration with Jagger on "Memo from Turner" that had me connect him with Mink DeVille in the first place. Jack put on a reel to show off his present work. Jagger listened to a couple of songs with polite disinterest, nodding approvingly to "Cadillac Walk." But when "Mixed Up, Shook Up Girl" came rolling out of the playback monitors, Jagger was immediately out of his seat and moving to its bittersweet mid-tempo rhythms. He danced with a grace one seldom sees in his herky-jerk stage performances, enveloped in the music and oblivious to the rest of us in the room... It couldn't have been more perfect if I'd dreamed it
Gepost door Arthur,s Musical Journey op maandag, juli 08, 2019