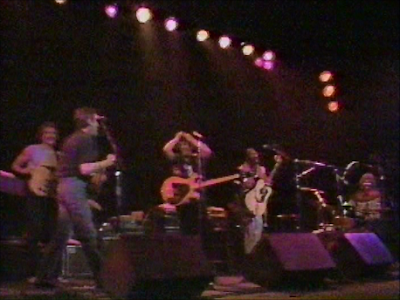 
"Rag Mama Rag" is a song by The Band which was first released on their 1969 album The Band. It was also released as a single, reaching #16 in the UK, the highest of any single by The Band. The single was less successful in the US, reaching only #57 on the Billboard Hot 100. "Rag Mama Rag" is credited solely to Robbie Robertson. However, Levon Helm claimed years later that the song was a group effort. The song has an improvised feel. The Band initially attempted to record the song in a straightforward manner, but it didn't sound right to Robertson. So drummer Levon Helm moved to play mandolin, pianist Richard Manuel played drums, bassist Rick Danko played fiddle and producer John Simon played tuba, while organist Garth Hudson played upright acoustic piano in a ragtime fashion. Helm sings the lead vocals. Although a fan favorite, originally the band didn't think that highly of the song, recording it almost as an afterthought. Robertson claims that "It didn't have very much importance until we recorded it, but it showed something else we could do, in a style that didn't exist." In The New Rolling Stone Album Guide, Matt Kemp described "Rag Mama Rag" as a "rural dance tune." (Wikipedia)
Gepost door Arthur,s Musical Journey op dinsdag, augustus 20, 2013