The Animals, one of the most successful R&B-based groups of the British Invasion, broke up in 1966. It was then that singer Eric Burdon released a single as a solo artist - "Help Me Girl" got to #14 in the UK and #29 in the US. He then moved to America, accompanied by Animals drummer Barry Jenkins, and recorded an album which ended up being released as Eric Burdon & The Animals, accompanied by Jenkins and a number of session musicians. It saw him move away from the gritty R&B that The Animals had been known for, and into more of a general pop sound. It was notable for featuring three songs by Randy Newman, who had yet to record his own debut album - "Mama Told Me Not To Come", "I Think It's Gonna Rain Today" and "Wait Till Next Year". The former in particular would later become very well known after Three Dog Night had a #1 hit with it in 1970.
ERIC IS HERE
Help Me ,Girl(album Eric is Here)

Despite being billed as Eric Burdon & The Animals, Eric Is Here was in reality a solo album. It was actually only released in the US, and was barely noticed. However shortly afterwards Burdon and Jenkins put together a new band to carry on The Animals' name, though their music was to take a radical change towards psychedelia as they emersed themselves in the American counter-culture 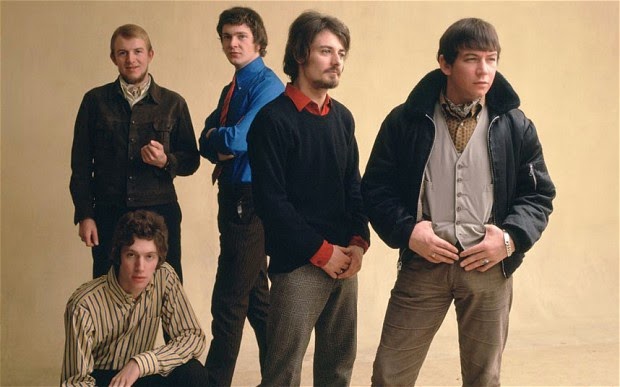 After the US-only Eric Is Here, which was essentially a Burdon solo album, they set about forming a new group to carry on The Animals name. They were joined by Vic Briggs (guitar/keyboards), John Weider (guitar/violin) and Danny McCulloch (bass), and became known as Eric Burdon & The Animals (sometimes referred to as The New Animals). Settling in California during the Summer Of Love, and no doubt fuelled by his first LSD experience, Burdon led this group into strange new psychedelic territories that had little at all in common with the R&B styled sound of the original British group.

Their first release was the single "When I Was Young", which did well in the US and made it to #15. The band then got the chance to play at the Monterey Pop Festival. Their first album together came out later that year. Winds Of Change was definitely a very strange record, the sort of thing that would (and did) divide fans of the original group. With unusually sparse instrumental arrangements, atmospheric sound effects and just as much spoken word as singing, it was a clear statement of Burdon's new direction and dedication to the hippie counter-culture.


Among all the 'experimental' numbers were a few more conventional songs, including a great cover of The Rolling Stones' "Paint It Black". Two surprisingly gentle songs were released as singles - "Good Times" got to #20 back in the UK, and "San Franciscan Nights" made it to #7, also reaching #9 in the US (actually the highest charting single for The Animals in the US since "House Of The Rising Sun" back in 1964).


Eric Burdon & The Animals had played at the Monterey Pop Festival back in the summer of 1967, and this became the subject of their next single after their pschedelic debut Winds Of Change. Compared to the strange experimental psychedelia of that album, "Monterey" was very much a rock song, a catchy number which recounted the band's experience at the festival, complete with driving beat and sitar. The lyrics referenced many of the other acts in typical Eric Burdon style - "The Byrds and the Airplane did fly / Ravi Shankar's music made me cry". It got to #15 in the US (its release in the the UK was delayed almost a year, and then it did not chart).

Their next album came out in 1968. The Twain Shall Meet was a much more focused album than Winds Of Change, and saw the band developing into a seriously good psychedelic rock group, with an ambitious blend of mood pieces and rockers. It featured another hit single - the anti-war anthem "Sky Pilot" got to #14.

The New Animals were expand to a six-piece with the arrival of keyboard player Zoot Money (previously of Zoot Money's Big Roll Band, and Dantalian's Chariot) in time for the their third album, where he was credited as George Bruno. Not much time had passed since their last album, but things changed quite dramatically with Every One Of Us, though it could be argued that not many people noticed. Eric Burdon seemingly abandoned 1967-style hippy psychedelia almost as quickly as he had wholeheartedly adopted it, instead aligning himself with the poor and the down-trodden for a semi-concept album. It turned out to be a somewhat melancholy, moody collection of songs, with jazzy and folky arrangements in place of tripped-out acid rock (though there was one heavy rocker included). Though as always with Burdon's late 60s work, there had to be something strange to throw things off, and here it was the inclusion of two lengthy dialogue recordings, as if he had run amok with a dictaphone and been allowed to include his results on the album due to the lack of new material. It sabotages an otherwise potentially perfect album, and one that would have been seen as a much more serious affair than its two predecessors - the songs the dialogues are attached to are perhaps the best on the album


Elsewhere there was a bluesy rendition of the folk song "St James Infirmary", and the single "White Houses" which got to a modest #67 in the US. The album itself barely charted, and wasn't actually released in the UK, so remains one of their least known. As an album it is obviously flawed, but there are some moments of really brilliant music to be found within.


Following the arrival of keyboard player Zoot Money, bassist Danny McCulloch left The Animals. Guitarist Vic Briggs was also replaced by Andy Summers, who had been with Money in British psychedelic group Dantalian's Chariot. This new lineup (Eric Burdon, Money, Summers, John Weider and Barry Jenkins) thus had no bassist - Money handled it in the studio, and on stage it was passed around between guitarists Summers and Weider.


They released a new album in 1968, the group's third from that year. Love Is was a double album, and consisted almost entirely of covers. Songs in a variety of styles were given big, ambitious re-inventions, several nearing ten minutes in length - Ike & Tina Turner's "River Deep, Mountain High", Sly & The Family Stone's "I'm An Animal", Johnny Cash's "Ring Of Fire", Traffic's "Coloured Rain", The Bee Gees' "To Love Somebody" and Albert King's "As The Years Go Passing By". There was also an excellent original song from Burdon, and a twenty-minute medley of two Dantalian's Chariot numbers written by Summers and Money. The album's sound was big and powerful, and the result was surely the masterpiece of the latter-day Animals. It even generated one final minor hit, as "Ring Of Fire" got to #35 in the UK.

However it proved to be the end of the road for the band, as they broke up shortly afterwards. Eric Burdon went on to join forces with Californian funk band War, and John Weider joined progressive rock group Family (replacing Ric Grech). Zoot Money continued to work in both music and film, and Andy Summers of course went on to fame as guitarist for The Police.

The story of Eric Burdon I found on the blog below, along with more beautiful music.I am very happy with it, Thanks Arthur

More Eric Burdon on my blog...
The Animals
http://arthurfromholland.blogspot.nl/2011/01/animals.html

Eric Burdon - One more coffee for the road.
http://arthurfromholland.blogspot.nl/2010/11/eric-burdon-one-more-cup-of-coffee-for.html 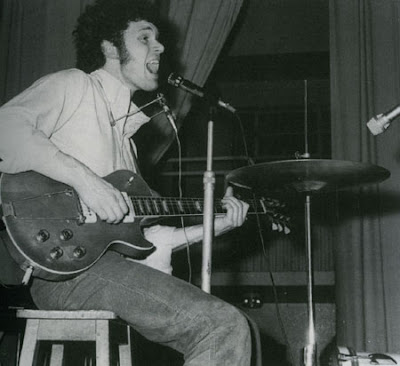 Bennett was born in Welshpool, Powys, Mid Wales. Emerging in the late sixties from the art school music scene of Kingston-upon-Thames and Guildford, Bennett was a one-man blues band whose virtuosity and co-ordination on drums, guitar and harmonica was as riveting as it was unique. His live sets combined his own compositions with Jimmy Reed-style blues standards often aided by friends Peter Green and Top Topham. He was a session musician in the early 1960s playing harmonica. Between 1968 and 1970 he seemed ever-present on John Peel's Top Gear and Sunday-repeated-on-Wednesday shows, gigged prodigiously and eventually joined John Mayall's Bluesbreakers as band member/solo act on a US tour in 1970. In the 1970s he drifted off into more whimsical mainstream material, but never landed the hit record his catchy and accessible tunes deserved.

His music was country blues with the occasional gospel offering. He recorded three albums and a string of singles for Blue Horizon. Bright Lights was recorded live at his beloved Gin Mill Club. He was very popular amongst the blues cognoscenti, while his legacy on Smiling Like I'm Happy was the haunting Jumping at Shadows, subsequently covered by Fleetwood Mac and revived in 1992 by Gary Moore, who covered it in his "After Hours" album. It is considered by some to be one of the best blues compositions penned on the east side of the Atlantic. Attempts to gain wider appeal with Mickie Most were unsuccessful. For decades, a clutch of live and home recordings on Indigo seemed to be all that remained of his work in the CD public domain until the 2006 first-time CD release of the Complete Blue Horizon Sessions reminded fans of what had been lost.


Let it shine with John Mayall & The Bluesbrakers


After performing with Memphis Slim on 26 March 1976, Bennett was driving home in a Ford Transit van in Warwickshire when he apparently fell asleep at the wheel. The van collided with a truck and Bennett was killed.
(Bron Wikipedia) 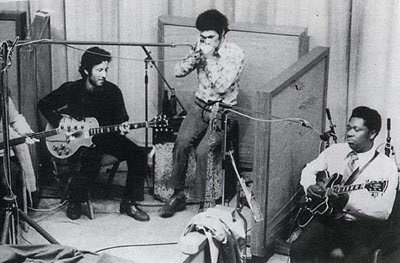 Over in Europe there were also earlier pioneers who heard and spread the music. In the UK, Alexis Korner, Long John Baldry and many others, too have long since passed. Celmins’ “Jumping at Shadows” tells the story of the tragically short life of one who followed in those footsteps. The title, itself, is the first clue. “Jumping at Shadows” is his most enduring song, recorded several times and made his own by blues rocker Gary Moore. The author of that song has a story well worth following up. It’s a story tied up with the early British blues scene, along with much better known names – the Rolling Stones, Eric Clapton, John Mayall and Fleetwood Mac.

The writer of “Jumping at Shadows” was Tony ‘Duster’ Bennett. Martin Celmins, who has also written a biography of Peter Green, has compiled a detailed account of Bennett’s short life. Bennett died in a road accident in 1976 at the age of 30. 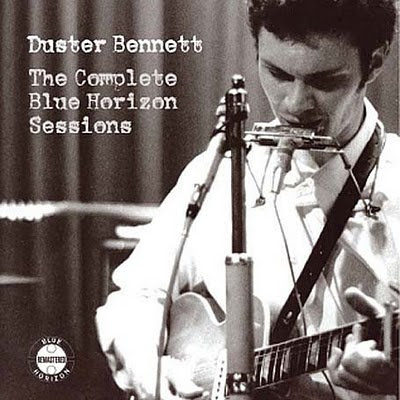 watch the interview on Vimeo 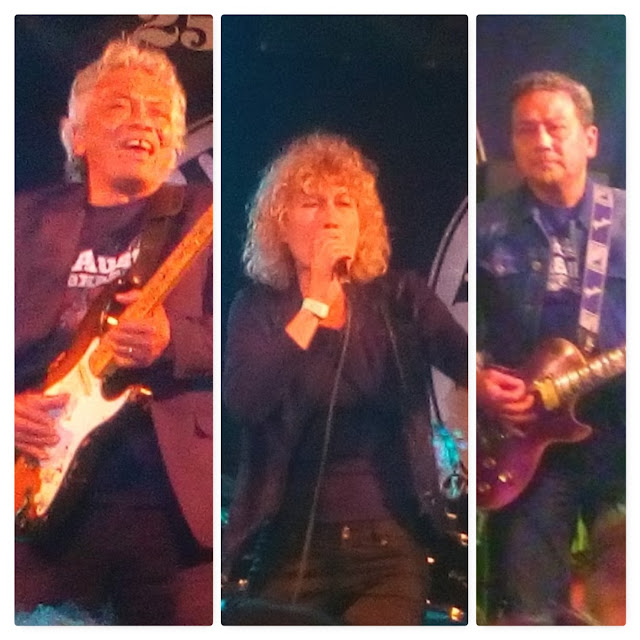 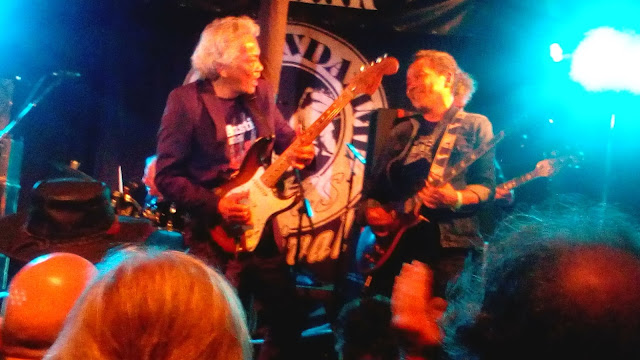