Juzzie Started playing the harmonica at 13. By 23 he had won the coveted Golden Harmonica at the Tamworth Country Music Festival, and the Byron Bay Blues Blowout twice. He has in the course of his musical journey embraced and mastered a range of instruments, and absorbed influence from some diverse musical styles. Juzzie has played in a lot of bands, some fantastic and some forgettable, and performed with some of Australia’s best musicians, including John Butler, Damon Davies, Jodi Martin and Jeff Lang.

Juzzie performs original songs with a completely original sound. Juzzie really began to take shape as a solo performer in early 2003, after the birth of his oldest child Olive.

Tired of late nights gigging in smoky pubs, Juzzie quit the band he was playing with at the time, and began to busk at the local markets around his home on the North Coast of NSW. It was around this time that he finished recording his second solo album, Goodvibes, decided to buy an old school bus, packed up his little family and took off on a busking tour of Australia.
They soon dropping the ‘s’ and ‘h’ from the school bus and made it the ‘cool bus’ and began a great journey into music. Juzzie travelled North through Darwin and then down through WA.

He started off playing to crowds of fifty or so and collecting enough coin to pay for fuel, whilst continually refining his songs, his instruments and his performance. By the time they arrived on the streets of Perth Juzzie was pulling crowds of hundreds of people at a time, busking was starting to look like a viable career option. 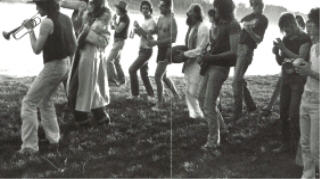 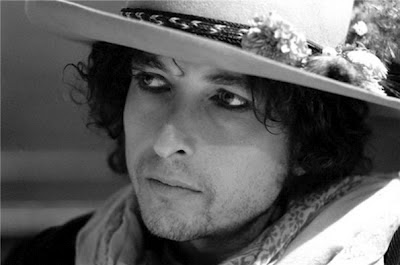 The Rolling Thunder Revue was a famed U.S. concert tour consisting of a traveling caravan of musicians, headed by Bob Dylan, that took place in late 1975 and early 1976; the prevailing theory was that the tour was named after the Native American shaman Rolling Thunder. Others maintained that tour was named after Operation Rolling Thunder, the U.S. aerial bombardment campaign conducted during the Vietnam War. But according to Dylan, there was a simpler explanation "I was just sitting outside my house one day thinking about a name for this tour, when all of a sudden, I looked into the sky and I heard a boom! Then, boom, boom, boom, boom, rolling from west to east. So I figured that should be the name". The January 1976 release of Dylan's album Desire fell between the two legs of the tour.


Tangled Up In Blue
Dylan wrote this in the summer of 1974 at a farm he had just bought in Minnesota. He had been touring with The Band earlier that year.

Among those featured in the Revue were Joan Baez, Roger McGuinn, Ramblin' Jack Elliott, Kinky Friedman and Bob Neuwirth. Neuwirth assembled the backing musicians, including T-Bone Burnett, Mick Ronson, David Mansfield, and Steven Soles, and, from the Desire sessions, the violinist Scarlet Rivera, the bassist Rob Stoner, and the drummer Howie Wyeth.
Isis


"Isis" was one of seven songs on Desire co-written between Dylan and songwriter and theatre director, Jacques Levy.
A live version of "Isis" features on the compilation album, Biograph. Dylan introduces it as "a song about marriage."
In October 1975, soon after completing Desire, Dylan held rehearsals for an upcoming tour at New York's midtown Studio Instrument Rentals space. The bassist Rob Stoner, the drummer Howie Wyeth, and the violinist Scarlet Rivera, all of whom were heavily featured on Desire, were retained for the rehearsals. Joining them were T-Bone Burnett, Steven Soles, and David Mansfield. The three had been dismissed during the Desire sessions in attempt to focus the overall production, but Dylan decided to recruit the trio for the upcoming tour.

Romance In Durango
"Romance in Durango" concerns an outlaw and his lover, on the run in Mexico. Heylin described the song as "the climax to an unmade Sam Peckinpah movie in song."

When rehearsals began, many of the musicians were apparently uninformed about plans for an upcoming tour. At the same time, Dylan was casually inviting others to join in with the band. According to Stoner, the group rehearsed "for like a day or two - it [was] not really so much a rehearsal as like a jam, tryin' to sort it out. Meanwhile all these people who eventually became the Rolling Thunder Revue started dropping in. Joan Baez was showing up. Roger McGuinn was there. They were all there. We had no idea what the purpose for these jams was, except we were being invited to jam


On October 30, Dylan held the first Rolling Thunder Revue show at War Memorial Auditorium in Plymouth, Massachusetts. The first leg of the tour was relatively small, spanning thirty shows and reaching only towns along the northeastern seaboard, including some in Canada. However, the secrecy surrounding the tour's intended destinations, the new material Dylan was premiering, and the inclusion of Joan Baez on the same bill as Dylan for the first time in a decade ensured the tour a good share of media coverage.[citation needed]


Aint Me Babe
"It Ain't Me Babe" appears as the last track on side two of Dylan's fourth studio album, Another Side of Bob Dylan. This was the legendary album which Dylan recorded in a single all-night studio session, aided by "a couple of bottles of Beaujolais."


"The Rolling Thunder Revue shows remain some of the finest music Dylan ever made with a live band," wrote Clinton Heylin. "Gone was the traditionalism of The Band. Instead he found a whole set of textures rarely found in rock. The idea of blending the pedal-steel syncopation of Mansfield, Ronson's glam-rock lead breaks, and Rivera's electric violin made for something as musically layered as Dylan's lyrics...[Dylan] also displayed a vocal precision rare even for him, snapping and stretching words to cajole nuances of meaning from each and every line."


A second Hurricane Carter benefit was held at the Astrodome Houston, Texas on January 25. Before the Concert, Dylan chose to meet with the man that discovered him, Roy Silver, and Silver's partner, manager Richard Flanzer for some advice. Silver and Flanzer quickly provided artists including Stevie Wonder, Ringo Starr and Dr. John, to make this concert the most successful event of the tour, with Dylan at his best.
Dylan then tried to recreate the Rolling Thunder Revue's success in the spring of 1976. Rehearsals were held in Clearwater, Florida during April, and the first show was on April 18 at the Civic Center in Lakeland, Florida. The tour continued throughout April and May in the American South and Southwest.