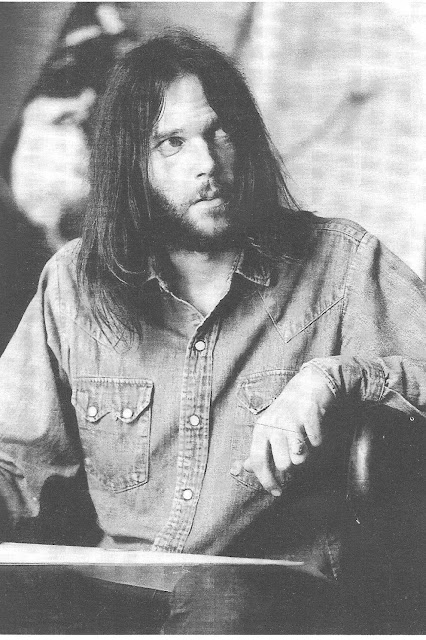 "Down by the River" is a song composed by Neil Young. It was first released on his 1969 album with Crazy Horse, Everybody Knows This Is Nowhere. Young explained the context of story when In the liner notes of his 1977 anthology album Decade, Young states that he wrote "Down by the River," "Cinnamon Girl" and "Cowgirl in the Sand" while delirious in bed in Topanga Canyon with a 103 °F (39 °C) fever.(Wikipedia)


"After the Gold Rush" is a song written by Neil Young from the 1970 album of the same name. In addition to After the Gold Rush, it also appears on Decade, Greatest Hits and Live Rust.
The song contains lyrics associated with the environment in the form of a dream vision.[1] The three verses are often categorized as a movement from past, present and future. In addition to Young's vocals, two instruments are used in the song: a piano and a flugelhorn. The flugelhorn solo in the middle of the song is often replaced by a harmonica solo from Young in live performances. The line "Look at Mother Nature on the run in the 1970s" has been amended by Young in concert over the decades, and currently is sung as "Look at Mother Nature on the run in the 21st century."(Wikipedia)


"Helpless" is a song written by Canadian singer-songwriter Neil Young, most famously recorded by Crosby, Stills, Nash & Young on their 1970 album Déjà Vu.
"Helpless" was originally recorded with Young's band Crazy Horse in early 1969, before Young's new CSNY bandmates (he had joined the then-trio in mid-1969) convinced him it would suit them better. The song was simple, at its core effectively the repetition of one melody over a descending D-A-G chord progression. The group found difficulty deciding on an arrangement and many different versions of the song were recorded before the group finally decided on the slow-paced version that appeared on the album. On this final version Young was in the foreground, singing the verses and the chorus with his bandmates providing the "helpless" refrain, while the instrumentation came in the form of acoustic guitar, electric guitar (with volume pedal and tremolo), piano, bass and drums. It became one of the most revered songs from the Déjà Vu album (Q magazine's Peter Doggett regards it as "one of (the album's) showpieces"), and has remained a live favorite of Young's for over thirty years. An alternate mix of the CSNY version was released on Neil Young's "Archives Vol. 1." It features Young playing harmonica prominently in the mix.(Wikipedia)

"Cowgirl in the Sand" is a song written by Neil Young and first released on his 1969 album Everybody Knows This Is Nowhere. Young has also included the live versions of the song on several albums and on the Crosby, Stills, Nash and Young album Four Way Street.[1] It has also been covered by The Byrds on their self-titled album.[2][3] Like two other songs from Everybody Knows This Is Nowhere, "Cinnamon Girl" and "Down by the River", Young wrote "Cowgirl in the Sand" while he was suffering from the flu with a high fever at his home in Topanga, California.(Wikipedia)


"The Needle and the Damage Done" is a song by Neil Young that describes the descent into heroin addiction of musicians he knew. It was written about the heroin use of his Crazy Horse guitarist Danny Whitten, and previews the theme of "Tonight's the Night", a song that addresses the heroin overdose and death of Bruce Berry, a roadie for Young and his band Crazy Horse.
"The Needle and the Damage Done" first appeared on the Harvest album in 1972. The song was recorded live rather than in the studio. It appears on the compilation albums Decade and Greatest Hits. On the handwritten liner notes included in Decade, Young had this to say about the song: "I am not a preacher, but drugs killed a lot of great men. (Wikipedia)

"Heart of Gold" is a song by Canadian singer-songwriter Neil Young. Released from the 1972 album Harvest, it is so far Young's only U.S. #1 single. In Canada, it reached #1 on the RPM national singles chart for the first time on April 8, 1972, on which date Young held the top spot on both the singles and albums charts. In 2004, Rolling Stone ranked it #297 on their list of the 500 greatest songs of all time.(Wikipedia)

"Cinnamon Girl" is a song by Neil Young. It debuted on the 1969 album Everybody Knows This Is Nowhere, which was also Young's first album with backing band Crazy Horse. Released as a single the following year, it reached #55 on the Billboard Hot 100 in 1970.(Wikipedia)


The song was written for the caretaker of the Northern California Broken Arrow Ranch, which Young purchased for $350,000 in 1970. The song compares a young man's life to an old man's and shows that the young man has, to some extent, the same needs as the old one. James Taylor played six-string banjo (tuned like a guitar) and sang on the song, and Linda Ronstadt also contributed vocals. In the movie Heart of Gold, Young introduces the song as follows:


About that time when I wrote (Heart of Gold), and I was touring, I had also -- just, you know, being a rich hippie for the first time -- I had purchased a ranch, and I still live there today. And there was a couple living on it that were the caretakers, an old gentleman named Louis Avila and his wife Clara. And there was this old blue Jeep there, and Louis took me for a ride in this blue Jeep. He gets me up there on the top side of the place, and there's this lake up there that fed all the pastures, and he says, "Well, tell me, how does a young man like yourself have enough money to buy a place like this?" And I said, "Well, just lucky, Louie, just real lucky." And he said, "Well, that's the darndest thing I ever heard." And I wrote this song for him.(Wikipedia)